The Nymphaeum of the Theatre

Again we have stumbled upon an obscure Italian language work that (maybe) fills in some unresolved issues and yet languishes in obscurity because it is in Italian.
Back in 1952, Guiseppe Spano wrote his piece Il "Ninfeo del Proscenio" del teatro di Antiochia su l'Oronte for the Rendiconti of the Accademia Lincei. Spano at the time was a veteran archaeologist having been the Royal Inspector of Pompeii decades before and was a luminary in Italian archaeology. He had a history of writing on theatres and triumphal arches. One of his other works, Il teatro delle fontane in Pompei also dealt with what he felt was a nexus between water features and theatres. So much for googling someone to find an author because he is very hard to get information on.

This major essay of his is only cited in a couple of other texts and finding the actual edition of the Rendiconti was a truly Sisyphean task, even at the New York Public Library (mainly due to the proliferation of nearly the same titles and the confusing volume and series numbers that Lincei used). It involved no less than six visits, several failed deliveries and much frustration. Rather than "published and be damned" its "publish and be forgotten" if Italian is your language of choice!

Was it worth it? Well, Spano picked himself an obscure subject indeed, even by Antiochene standards. We all make bricks without straw in this field as there is so little to go on. He chose as his topic the nature of the nymphaeum which is sometimes referred to in the ancient texts. He goes for a rather holistic solution and not only bundles the nymphaeum into the theatre (which I dealt with elsewhere), but also combines in the Shrine of Tyche and its numismatic evidence trail.

Interestingly he mixes into the subject the theme of the Septizodium in Rome, which I myself had mixed into discussing the Lesser Nymphaeum.

His main thesis is that the nymphaeum was combined with the scaenae frons of the theatre. Moreover the water feature included a central section with the Tyche shrine embedded in it and then there were elements of the seven divine bodies also in the sculptural arrangements. He even goes so far as to say that Eutychides' famous statue had the boyish Orontes figure rising literally out of the waters of the nymphaeum. An interesting piece of artistic sleight of hand.

It is true that the ancient texts mentioning the reconstructions of the theatre talk of a statue of Tyche being positioned upon the theatre in Trajan's rebuilding of the structure. However does one need to resite the famous statue into a niche at the theatre to link the two occurrences. I have long been under the impression that the shrine of Tyche was down near the riverbank of the Orontes. To me the images on the coins that show the shrine make it look like a standalone baldachin-type structure, not a broken-pedimented fountain excerpt.

While the city had other important deities, Tyche was almost Antioch's own daughter and to think that the famous statue would have been hauled up the hill to become a water feature is a tad far-fetched. Definitely a demotion in godly status if you ask me. Why should one need to draw this conclusion? Rome had various statues of Apollo and Jupiter, as did every other major city. Why shouldn't Antioch have had several Tyche's adorning its streets and fountains? I do not doubt that the theatre had an image of Tyche but I doubt that it was Eutychides' statue and there is no reason to presume she should have been positioned in the fountain when it was always sounded like she had a shrine at the top of the cavea.

The essay includes some images from the theatre at Aspendos. This is the best preserved theatre in the Roman world and is truly stunning. One of the images of the Nymphaeum at Aspendos (separate from the theatre) caused me to do a double take, because this plan of the nymphaeum looked very similar to the plan we included of the Lesser Nymphaeum excavated by Lassus with its array of rectangular and semi-circular niches for statues. This had prompted us to our Septizodium comment.

Spano goes on to make a good case for Tyche being linked to the heavenly bodies and uses the statuette below from the British Museum as a key example of this pairing. 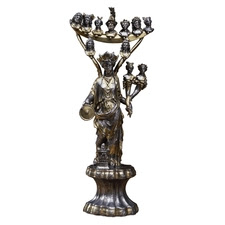 He also discusses an image from the Megalopsychia mosaic that shows what he believes might be a naumachia even though it only has a rowing boat in it. He also discusses at length the "theatron" discovered at Daphne which others have mused upon as being some sort of ornamental reservoir/water feature, though he feels this might be the structure from the mosaic image.

The essay is well worth reading for the various novel points of view it makes. The idea of a nymphaeum on the outside wall of the scena frons makes lots of sense. Uggeri's map almost gives this "feature wall" the opportunity, via his positioning of it at right angles to one of the east-west throughfares to provide a Haussmanesque vista up one of the street/avenues rising towards the theatre. Alas the theatre is no more. The small relics that survived above ground have been "improved" out of existence by Antakya's modernizers though it is pretty well known where it was and some demolition and excavation could bring a lot more of the structure to light and answer some of the issues that Spano raises.
at April 10, 2009

Is Italian a language that scares scholars? If they know some Spanish or Latin or even French they might get part of the way with an Italian text. Not having had more than a few hours in Italian in my life (those being in 1968 when I was 7) I still did not find Uggeri (who I have mentioned before) or this latest source Guiseppe Spano all that daunting. Once one dives in the text is particularly comprehensible because so much of what is being talked about is familiar in whatever Western European language and is not that hard to get a handle on. The risk is that subtleties are lost. However, being fluent in Argentine Spanish with its heavily Italianised mindset may have given me a leg up!