As mentioned in another post, Antony and Cleopatra sojourned in Antioch in 36-35 b.c.e.. Remarkably the literary evidence is poorer from the numismatic traces.

Cleopatra appears in the form of a bust, wearing an elaborate dress and necklace, and Antony is shown only to the base of his neck. Both rulers appeared on coins from Antioch independently of one another (Walker and Higgs 2001: 234, nos. 218–22).

Antony and Cleopatra were the star-crossed lovers of the period of transition from Republican to Imperial Rome. And Cleopatra was the harbinger of the end of Egypt's independence for the next two thousand years. Their fates are usually portrayed as being played out in Alexandria, and to a lesser extent Rome, but the other major city of the Roman realm, Antioch, played a brief but crucial role in harbouring this pair during their brief ascendancy.

Antony resolved to make a foray against the Parthians and, like so many after him, chose Antioch as the base for this campaign. In late Autumn of 37 b.c.e. Antony sent Fonteius Capito (a Plebeian Tribune) to bring Cleopatra to Antioch to discuss this planned invasion of Parthia. Her grip on Egypt had been secured through good governance (and some good harvests) and her position was much stronger than it had been at the time of their first meeting at Tarsus four years earlier.

The ancient sources rightly point to the renewal of Cleopatra’s affair with Antony as one of the main results of her stay at Antioch from the Autumn of 37 b.c.e. through the winter of 36 b.c.e.

The primary source for reports of this stay has been Plutarch's Life of Antonius, 36.

Glanville Downey claims that Antony married Cleopatra at Antioch during this stay (though he was still married to Octavian's sister, Octavia). He notes that none of the sources specifically state that the wedding took place in the city, but that it took place at this time. As a wedding gift, Antony presented her with territories in Syria and Palestine.

Cleopatra, according to Stanley Burstein, also won Antony’s recognition of Alexander Helios and Cleopatra Selene as his children. Apparently when she returned to Egypt the next spring, she was pregnant again with his child (Ptolemy Philadelphos). This would seem to indicate that the couple were together in Antioch for four or five months in total.

Cleopatra also achieved major political successes at Antioch. In preparation for the Parthian expedition, Antony carried out the most extensive reorganization of the Roman east since the 60s b.c.e., rewarding loyal client kings and removing those suspected of Parthian sympathies. In addition to confirming her authority over Cyprus, Antony put under Egyptian rule an enormous swath of territory, including the island of Crete, Kyrene in modern Libya, numerous cities in Phoenicia, Syria and Cilicia in southern Turkey, and the Arab kingdom of Iturea in northern Palestine.

It is surprising, or maybe not, that all we have is Plutarch's account as a record of this important sojourn in Antioch for nearly half a year by two of history's most important figures .

It begs several questions and generates some assumptions. As the flamboyant queen of Egypt with a very substantial entourage it must be assumed that she went in style to Antioch. Cleopatra was not one to "travel light". Consequently, from the vast spacious royal compound in Alexandria, one cannot imagine her moving into anything less than the  former Seleucid royal palace in Antioch for such an extended stay (and in winter moreover, which have mitigated against an encampment).

Knowing the Antiochians' love of pleasure and spectacle there must also have been much in the way of panoply and theatre (both on and off the stage).

Finally we might also wonder whether the stay was a "family event" with the two new children of the couple (who would have been 4 years old) in attendance, and maybe even Caesarion (the child of Cleopatra by Julius Caesar). 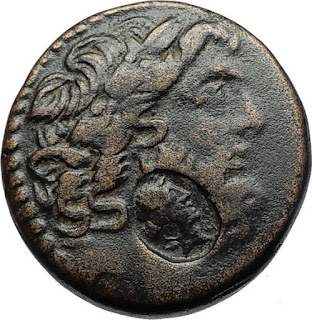 Above can be seen a coin from the Antioch mint with a Cleopatra countermark. It is worth noting that in 39/38 BC, Antonius had appointed Fonteius Capito to the office of monetalis in one of the eastern provinces of the empire, during which time he minted coins.