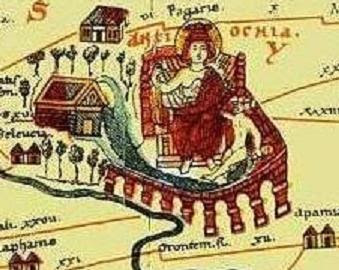 This image, though grossly inacurate and fanciful, is worth showing. I actually own a copy (purchased on Ebay in the non-coloured form) which frankly is easier to discern details upon. 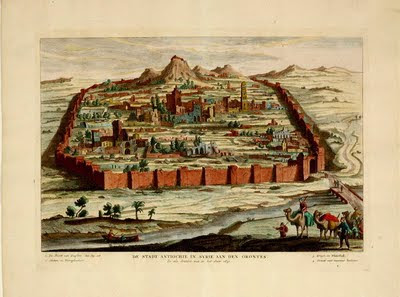 The artist is sometimes described as unknown and sometimes as being Agustinus Calmet, though he may be the engraver. It an copper engraving of a view of Antioch, supposedly as it was in the year 1630.

A number of names are thrown into the ring when the subject of the "first" librarian is brought up. Almost all have some relationship to Alexandria. However, a close-run candidate is the learned epic poet, Euphorion of Chalcis, who at least appears to be the first librarian at Antioch.

The life of this poet and fragments of his works were published by Augustus Meinecke in his magisterial, De Euphorionis Chalcedonsis, vita et scriptis in Analecta Alexandrina. It is frankly amazing that Meinecke found so much to say about the fellow.

Euphorion, the son of Polymnetus, was born at Chalcis in Euboea, in some versions around 274 BC. He later obtained the right of citizenship at Athens. He was the pupil of Lacydes and Prytanis in philosophy, and of Archebulos in poetry.

Antiochus III established a library in Antioch, which in 220 B.C. was placed under the care of Euphorion, then aged 50, who held the position until his death.

Euphorion principally devoted himself to epic poetry, but be also wrote elegies and epigrams. He also produced some treatises on grammar and history. He was charged with being obscure in his expressions, and with using words in a forced sense.In the following century he became a favourite model with poets such as Tibullus, Propertius, and Cornelius Callus, besides being the theme of a passing reference in Virgil (Eclogues x 50).

He wrote a book on the Isthmian Games.