Gregoire Poccardi marvels at how the Princeton team could have totally overlooked the theatre site in Antioch. He notes that it is even stranger because Forster in his flying visit in the 1890s identified the site. The Princeton team were supposedly looking for it, but maybe they were not looking too hard. As we noted elsewhere Antioch probably had several theatres. These would have been in all sorts of sizes and with different usages.
However, the city probably did have one main theatre for there are various references to it.  Its location was identified by Poccardi, as per the map below. 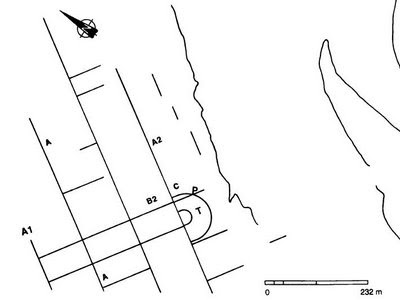 The theatre is at letter T. This is now the block bounded by 4 sk, 5 sk, Bagyolu sk and Cetin Emec Cd on the Google map here.

This is in modern day Antakya is the site of a "park". We use the term loosely because we havent seen such a rugged urban park before. The main consolation is that this hasn't been built over and the town has clearly kept it for "future consideration". Our colleague, Jorgen Christensen-Ernst, ventured forth and took the following pictures recently. 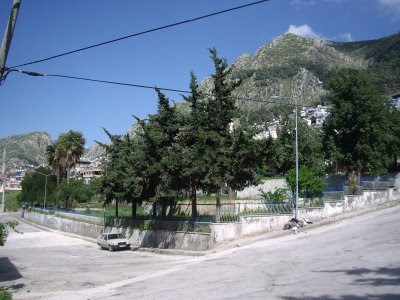 Here is a view of the park from its lower western corner. The site is large enough to have encompassed a substantial theatre, with the implication that any excavation taking in the park and the surrounding streets (which are wider than need be) could reveal the complete structure. 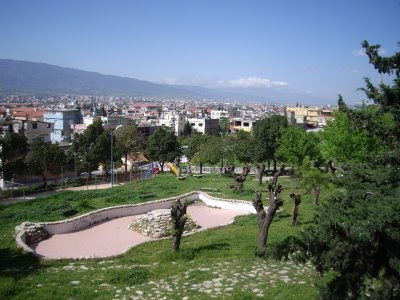 This is a view of the park from above. One should imagine that one is standing upon the upper tiers of the cavea of the theatre here and that 1500 years of detritus moving downhill has largely filled in the slope of the structure. If the depth of the fill is anything like that in the old town (11 metres) then the lower levels of the theatre (the scenae and orchestra) could be in recognizable and quantifiable condition if the overburden is removed. This would involve losing the park and its stony wastes and dry pond. 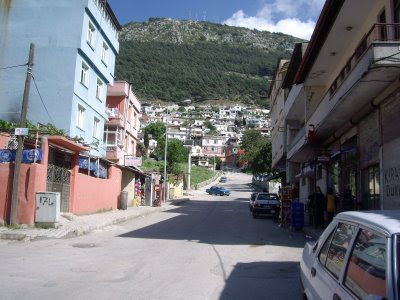 This is a view from below showing the steepness above the theatre site (on the right of the street). If one can believe the story of the Persians surprising the locals at play in the theatre then it would have been from these upper slopes that they rained down their arrows on the crowd.

Poccardi says the theatre would have had a diameter of 120m, thus it almost certianly would have seated more than 10,000 people.

Ancient cities were a sea of columns but not all columns were created equal. The kings of the columnar world were the honorific columns for emperors and gods. Antioch had several famous examples of this form.

Russell Sturgis in "A dictionary of architecture and building biographical historical, and descriptive" published in 1901 ranks three of Antioch's columns as worthy of mention. The first was one of Theban granite surmounted by a statue of Tiberius, in the centre of the Forum of Antioch, in gratitude for the magnificent public structures of this emperor (especially the double columnar street colonnades). Lassus speculates that the round plaza on the Colonnaded Street that he excavated under the Al Nejjar Mosque was the site of this statue rather in the Forum.
Sturgis also mentions another one of porphyry at Antioch, erected under Caligula as a talisman against earthquakes. It may be this that is referred to in the Vatican's Arab text in its regaling of the various superstitions of the city.
The final column of note was one of immense size with a statue of Valentinian erected to him by his brother Valens. This almost certainly was at the Forum of Valens.
at June 22, 2009 No comments: