A Twice per Century Event?

The last major tome dedicated to the history of Antioch was by Glanville Downey over half a century ago now. Not that there haven't been specialised/focused publications on sub-themes (e.g. Liebeschutz, A.F. Norman or Waldemar Ceran) in the meantime.

It is clearly time for a new infusion of comment and reassessment. The tragedy is though that scarcely any meaningful excavation has been been done since Downey's work. We certainly hope we must not wait another 50 years for some extensive work to be undertaken.

The latest addition to the short list of works is:  Antioch - A History by Andrea U. De Giorgi & A. Asa Eger, 2021 published by Routledge, which should be out at the end of May. 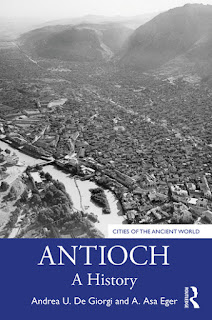