The Sarcophagus "Industry" in Antioch


Antioch was way more than just an Eastern outpost or some staging post on the way to campaigns against the Parthians. As the former capital of the Seleucid Empire for centuries it was where the wealth of that empire gravitated attracting the "big spenders" on not only its own area of dominion but from a broader region (as evidenced by Herod's gift of the Colonnaded Street). It was plugged into various strands of the Silk Road and the Red Sea trade as well as connections through to Palmyra providing interaction with that entrepôt.

So jewellery, textiles and perfumes were the prime stock in trade of the merchants and craftsmen dealing with the Syrian "carriage trade". All of these involved conversion of inputs from distant lands into products for local consumption or export to points west in the Roman Empire.

However, one range of products has received less focus mainly because it is so difficult to pinpoint the exact origin of where work was undertaken. This subset of the city's production was its carved output. With so little in situ to be seen at the site of ancient Antioch and the excavations in the 1930s throwing up little in the way of statuary it has fallen to scholars to see commonality in widely dispersed objects and using the style similarities to source them back to workshops in Antioch. This has resulted in a typology for work of this nature originating in the Syrian metropolis.

Most prominent in cultivating this view was the prominent (and controversial) art historian Josef Strzygowski who in his paper entitled "A Sarcophagus of the Sidamara type in the collection of Sir Frederick Cook, and the influence of stage architecture upon the art of Antioch" (published in the Journal of Hellenic Studies, vol. XXVII 1907, p. 99-122, planches V-XII) launched his thesis upon the art world.

In this article he posits: "It now remains to prove that the Asia Minor sarcophagi also belong to this school of plastic art, and depend from a centre of which till now we knew very little, namely Antioch. For to the sphere of influence of this Syrian metropolis belongs also the region on this side of the Taurus whence the art tendency noticeable in the Richmond fragments may have travelled to the west of Asia Minor just as well as to Macedonia, Greece, Italy and Rome. For the present nothing can be determined with certainty, but it is my firm conviction that the Asia Minor type of sarcophagus had its origin neither at Ephesus nor in any other district of western Asia Minor, neither in Greece nor Rome, but in the angle which lay nearest to Mesopotamia, and had Antioch as centre of culture".

Here can be seen a few of the pieces of the sarcophagus that prompted this theory: 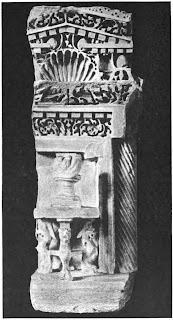 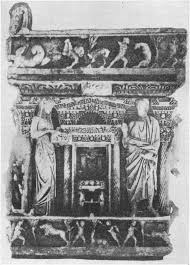 Strzygowski's thesis could be summed up as that the artists in Antioch took the proscenium of the theatre as their mise en scene for all manner of relief carving but most particularly with regard to sarcophagi. It would seem that Antioch had established quite a niche (excuse the pun) in this type of product and that marble from very distant quarries (as far away as Prokenessos in the Sea of Marmara) was shipped to Antioch to be transformed and then re-exported to a wealthy costumer base across the Empire.
at June 17, 2018 No comments:

I came across some more information on the destruction and relocation of the city by Khosroe in a paper by Katarzyna Maksymiuk entitled "Mass Deportations in Syria and Northern Mesopotamia under the rule of Xusrō I Anōšīrvān (540-542)", in. War and Population Displacement. Lessons of History, eds. Fernando Puell de la Villa and David García Hernán, Brighton-Portland-Toronto, Sussex Academic Press. 2018, 46-53.

I excerpt here the specifics related to how "Better-Than-Antioch" was effected:

"According to Jacob of Edessa, the Roman prisoners of war from the cities of Sula, Beroea, Antioch, Apamea, Callinicum, and Batnae were deported to Weh  Antioch Xusro (Jacob of Edessa, 1907: 320-321). As far as Sula and Apamea are concerned, no other sources confirm the information that deportations from these two towns took place. In the case of Beroea, Procopius of Caesarea clearly states that its inhabitants remained in Sergiopolis, and the majority of other authors, representing different cultural circles, mention the deportation of the inhabitants of Antioch.

Many sources describe complete destruction of Antioch. For instance, John Lydus states that "The statues, however, with which the city was adorned, he [Xusro] seized as booty, along with slabs of marble, precious stone and pictures; it was the whole of Syria that he carried off to Persia" (John the Lydian, 1812: III.54). It might seem that the pillage was not the goal of Xusro. A fragment of the chronicle of Pseudo-Dionysius shows he planned and systematic actions of Iranian king towards Antioch: "They stripped it and removed even the marble slabs which overlaid the walls, and took them away to their country, since they also were building in their country a city like this one and named it Antioch" (Pseudo-Dionysius of Tel-Mahre, 1933/1989: II, 69.7-15). The shahanshah decided to move into Iran not only the population but virtually the entire city.

Most information about building of the new city can be found in the testimonies of Procopius and the Arabic chronicles Tabari and Dinawari (Dinawari, 2012: 70). The new city was to be built on the original plan of the Syrian metropolis. "He [Xusro] then gave orders that a plan should be made for him of the city of Antioch exactly to scale (literally, according to its extent), with the number of its houses, streets and everything contained in it" (Tabari 1999: I.898).

The authors point out the special status of the city. It was excluded from the administrative system of the state. The city was a special district (kurah) for them consisting of four wards (tassujs): Upper Nahrawan, Lower Nahrawan Badaraya, Bakusaya. "He [Xusro] allotted living allowances for the people whom he had transported from Antioch to al-Romiyyah" (Tabari 1999: I.959-860). The inhabitants were called "king's subjects, so as to be subordinate to no one of the magistrates, but to the king alone" (Procopius, 1914: II.14.3-4).

An interesting legal aspect can be observed in the testimony of Procopius who wrote that "if anyone else too who was a Roman slave ran away and succeeded in escaping to the Antioch of Chosroes, and if he was called a kinsman by anyone of those who lived there' (Procopius, 1914: II.14.4), then in such a situation his owner would lose the ownership over the escapee even if the owner was a member of Iranian aristocracy. We can believe that escapes of this sort must have been quite common if special law regulated such events.

The inhabitants of Weh Antiok Xusro were not treated as captives but almost like guests. The ruler did not impose the Iranian religion (Jullien, 2006: 116; Maksymiuk, 2015c: 123-134) or Iranian habits on them (Dignas and Winter, 2007: 254-263). Barz, a Christian from Gondesapur, was appointed an administrator of the city, "because he was their co-religionist" (Tabari, 1999: I.960). Xusr6 provided at his expense the pastimes corresponding to culture and tradition of the inhabitants. According to Procopius, "a bath and a hippodrome", were built in the city so that the Antiochenes could have "free enjoyment of their other luxuries' (Procopius, 1914: II.14.1-2). The author of the Chronicle of Seert mentions that "when Xusro died, Antiochean Greeks whom he captured and settled in the city which he built for them, venerated him after his death, by their Christian habit, by following his remnants on their last way" (Chronicle, 1911: 197)".

As one of my prime interests is the physical heritage of the city it is interesting to note how the creation of the new city involved the wholesale removal of statues from Antioch. This might be a good explanation as to why so little sculptural material was recovered by the expeditions of the 1930s. However one wonders also after the destruction of the earthquakes and around 150 years of Christian ascendancy how much statuary remained in the city to be carried off. For instance was the famous Tyche still extant? It might be ironic if the original statuary of Antioch ended up being preserved at Khosroes' new city whereas the original Antioch has proven to have been destroyed so many times and ultimately made so inaccessible to archaeological work.

Then the comment that the city was built to the original plan of Antioch is intriguing. One wonders whether this could be true but only identification and excavation of the site of the duplicate city could reveal the truth of this.