Bath F (The Baths of Tiberius?)

That Antioch was liberally furnished with bathing establishments has long been a given. Libanius rhapsodizes over these establishments and their multiplicity. We detail some of the known information in a specific posting on the whole theme.

This note then is dedicated to the largest find by the excavators of the 1930s and one of these least reported. Bath F, which is suspected by some of being the historically cited Baths of Tiberius, was the most significant bathing complex found. Its mosaic (the Tethys mosaic) has received some coverage by art historians but the whole complex is scarcely mentioned by anyone except Hugh Kennedy in his piece on Antioch between the Romans and the Crusaders. He draws on some of the comments that were made by the excavators in their write up of the 1930s Princeton-led expedition.

I have recently come to spend some time with the second and third volumes of the Excavation reports. I would note that the first volume, written in the first flush of enthusiasm, had clear chapters for each major find (the tower on the Island, the Hippodrome, the baths on the Island). By the second and third volumes in the late 1930s the focus had switched to mosaicophilia and Bath F doesn't even merit its own chapter but rather is buried within a catch-all chapter on the boring stuff like buildings, even though it had the Tethys mosaic that set the hearts of museum directors racing in the drawing of straws to see who got to keep it for their collection.

However, Bath F is not like the plethora (five at latest count) of bathing establishments found on the Island. This is the only bath that was found on the "mainland" part of the city. And what a bath it was! The site stretched between the Colonnaded Street and the bend in the channel of the Orontes that separated the Island from the city proper. This meant that the complex was over 100 metres in length and covered a whole city block, which as we noted elsewhere were substantial in size. While not to be mentioned in the same breath as the Baths of Diocletian and Caracalla in Rome, these were nevertheless substantial and could be compared to excavated remains like the Hadrianic Baths at Leptis Magna.

The attribution of the baths to Tiberius is rather touchy-feely. There was no evidence at the baths to justify this. The only inscription uncovered related to the rededication of the complex in the 530s AD. The baths were initally substantial as we have noted. They were destroyed to a large extent in the earthquakes of the 520s. The were rebuilt in a scaled-down, and frankly mediocre fashion, as part of the efforts of Justinian, a feat that Malalas sings the praises of but of which we are skeptical. They were then destroyed again in 540 AD when Chosroes burnt down the city and were never rebuilt.

Excavations by the team did not extend to the whole site of the baths and this is an obvious target for future exploration as it is only a few metres below the surface and is still in one of the unbuilt parts of the walled city. What they did uncover was impressive enough.

In the words of the exploration report:

"Running south from a heavy masonry wall that had suffered severely from the activities of stone plunderers was a large three-aisled structure which had apparently had a wooden roof, possibly formining a clerestory over the central part. Traces of the burned roof beams were clearly to be seen on the floor.

The central aisle, some 12.40 m. wide, was floored with a mosaic pavement of floral carpet design surrounded by a geometric border. In the center was a medallion with an inscription stating that the monument was a bath and giving a date (AD 537/8) for the floor. At the north end the border is returned around the foundations of what appear to be two large half columns engaged against the north wall, The other limit of the room extends almost to the south end of a large pool.... The side aisles were floored in opus sectile of light and dark marble laid in simple geometric patterns. Each aisle is two panels wide and the designs are alternated in checkerboard fashion except for two instances in the west aisle.... Separating the nave and the side aisle s were arcades, resting on columns, many fragments of which have been recovered. The capitals include several with the abacus inscribed, apparently with an inscription that ran from one capital to the next. Several of the arcade voussoirs were found. The stylobate between the columns was paved with marble slabs....."

They finished their efforts by digging a trial trench to the Colonnaded Street to satisfy their theory that the complex went as far as the main thoroughfare. Opportunely their initial diggings focused on a area with turned out to be a sizable pool (whether hot,cold or tepid is not mentioned). This pool had originally been rectangular but subsequent "improvement" had made it octagonal and resulted in the overlaying of the original pool bottom with the Tethys mosaic. 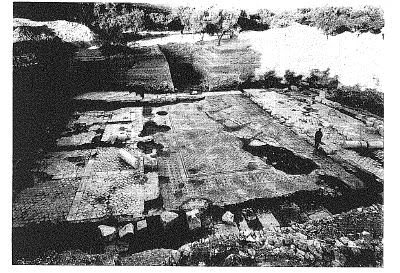 The plan below (click to enlarge) shows the remains of the main room as uncovered by the Princeton team. The baths were sizable to have such an enormous room within them. Baths were generally a complex with the full range of different temperature rooms and ancillary facilities like libraries and changing rooms and sometimes gardens and exercise facilities. This excavation (pictured above) zeroed in on only one part of the structure. It can be noted from the size of the figure in the photo that the floor level was between 2 and 3 metres below the current surface level.

Clearly the potential exists to re-excavate what the team found (it was all filled in again after the work) and expand the scope to cover the whole block and get a perspective of the whole complex. 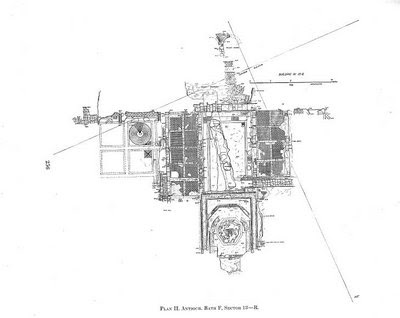 The plan unfortunately does not include the trench to the Colonnaded Street (which would be to the right) and the text neither signals how far the main room was from the Street in question nor what was found in the trenching exercise (e.g. other rooms, colonnades etc). 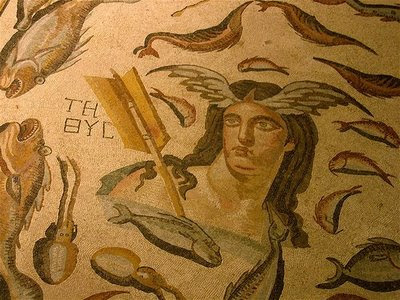 In what may be the unkindest cut of all, the Tethys mosaic (the central section of which is shown above) was lifted and sent to the Fogg Museum in 1939. It proved too large for the space and was sent to Dumbarton Oaks in Washington, DC where it ended up in an outdoor pool. Finally (and maybe not finally..) it was displaced by building activity at Dumbarton Oaks and migrated back to Boston where it was bought (and installed) by the Harvard Business School in 1990. It now lies in the Central Court of the Morgan Hall and serves as eye-candy for plutocrats in training.

Finally we might touch upon the water supply for this bath complex. Obviously if it covered most of a city block it was an enormous facility. Water to feed the demands of the baths must either have come from the Spring of Olympias or from one of the aqueducts that skirted the mountain. If the latter then we suspect that the supply must have come on a high-level branch from the main aqueduct and would have had to vault over the Colonnaded Street.
at April 10, 2009

In researching the house I grew up in and its barn, I came across The Pool of Tethys, which was actually stored in our barn (now torn down) in Lincoln, MA, apparently in September, 1943.
It was moved to Dumbarton Oaks in 1967. Thank you for your account, depressing as it is!