The guru on circus curses is undoubtedly Dr Florent Heintz who wrote his thesis at Harvard on "Agonistic Magic in the Late Antique Circus". He is now an expert on Egyptian antiquities at Sotheby's in New York. Several years ago when he was associated with the Worcester Museum (that off-the-beaten track Mecca for Antiochophiles) he wrote the article "Magic Tablets and the Games at Antioch" (page 163) in Christine Kondoleon's excellent catalogue for the exhibition Antioch: the Lost Ancient City.

Interestingly he starts off his thesis by invoking the chariot race scene from the film Ben Hur in which some of the drivers are seen acting out magic rituals to try and gain themselves an advantage in the race.

Below can be seen one of the circus curse tablets found ,by the Princeton team in the 1930s, rolled up in a drain along the central barrier and turning post of the Antioch hippodrome. This is currently to be found at the Princeton University Art Museum (inv. 3603-I57). This was made of a thin piece of lead which was rolled up and secreted in a location where it could do most "harm" or "good" depending on one's point of view. This example dates from the late fifth or early sixth century AD. 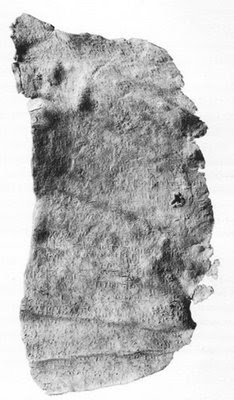 "Curse tablets and binding spells were quite popular in ancient Antioch, especially at the chariot races. To impress their emperor, charioteers would try to make their rivals' chariots overturn directly opposite the imperial box, and a curse tablet was one of the methods for accomplishing this. This curse tablet opens with a long invocation of divine epithets and magical names; it is addressed to Hecate and other deities of the Underworld. Then the curse itself: "Bind, lay waste, and overturn the horses of the Blue [faction]."

This is followed by 36 Greek names of horses. Usually curses aimed at circus competitors target the charioteers as well as the horses; this is an exception to the rule. By the end of the fourth century, chariot racing had been transformed from a contest of horses and drivers to one of magicians. All this was a risky business, as magic was against Roman law and severely punished. The Blue and Green factions, mentioned in this curse, were imperially sponsored organizations that took over the staging of public entertainment in the East in the fifth century AD; less curse tablets were found after this time than before".