The Course of the Orontes Branch(es)

Maybe the presumptions about the shape of the Island have their roots in Libanius' gushing description of the Island as being surrounded by its wall "like a crown". Much as one tries to resist it this comment evokes images of a round shape for the Island. Certainly it wasn't square, but what type of perspective could Libanius have had of the Island (short of climbing to the top of Mount Silpius to give him an all-embracing view of the Island). We suspect the "crown" analogy is merely that... an allusion. If one discards the "round" Island thesis then one can start to move away from the Wilber interpretation of how the Island was shaped in antiquity. The map below shows Wilber's speculation. 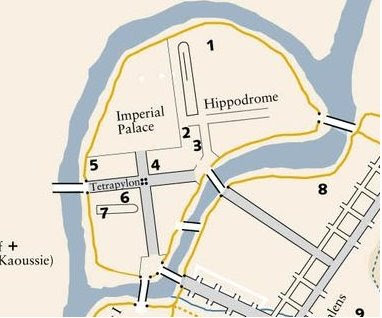 What is the matter with this interpretation? Well, geographical reality and the forces of nature are two good places to start. The Island either had two forms: Wilber's kidney shaped version or a more elongated island as Uggeri suggests.
On the basis of what I know of geography/topography the elongated form makes more sense if one perceives that the Orontes is a "strong" river rather than a weak one. There is no evidence to support a meandering Orontes either historically or in modern times. The faster a river is the more likely it is to be straighter (and its parts where it divides straighter). The Wilber version relies upon a very lazy Orontes indeed to create a river as he portrays it. In fact looking at his map the "branch" of the Orontes is the part to the west while the easternmost course (now silted up) is the main course of the river. The Orontes is a river with dramatic seasonal differences. Nowadays it is very low indeed in the summer due to the water being siphoned off upstream by the Lebanese and the Syrians that control the headwaters.

In a paper, The Geopolitics of Water by Paul Michael Wihbey and Ilan Berman, the authors comment on the current flow situation of the river: "According to Turkish estimates, Syria utilizes 90 percent of total Orontes flow (which averages 1.2 billion meters annually at the Turkish-Syrian border), allowing only a meager 10 percent to pass into Turkey. Furthermore, Syrian proposals to create two additional reservoirs along the river threaten to reduce Orontes flow to Turkey even further. In effect, Syria has used its control over Orontes water as a weapon, seriously eroding the agricultural and economic situation in Turkish Hatay".

In the winter and spring the river still carries sizable volumes of water from the heavy (and notoriously so) rainfall in the lower reaches of the Orontes valley. Thus high water is still achieved in these seasons. The flow rate of the river averages 5.04 m/sec with an annual flow of 2900 billion m3.

One can merely speculate upon the effect that the drainage of the Lake of Antioch (upstream where the valley widens out) in the post-WW2 era. Such a lake usually has the effect of storing water and slowing the flows. This massive wetlands area was eliminated to foster the cultivation of cotton with rather dire natural effects upon birdlife and the famous flow of eels up the river.

In any case the Orontes was a strong river in Antiquity. Thus there is no reason to surmise that the Island was the shape that Wilber gave it, particularly as no exploration has been done at the northern "end" of the Island to delineate its extent.

Uggeri's version, as we noted elsewhere, has a very interesting spin. He has the Island very elongated, with the rationale for the western side of Theodosian wall being as straight as it was being due to it running along the river bank for most of its western side. One does not need to be steeped in geography to see that this makes more sense with a "strong" river in a largely alluvial plain. 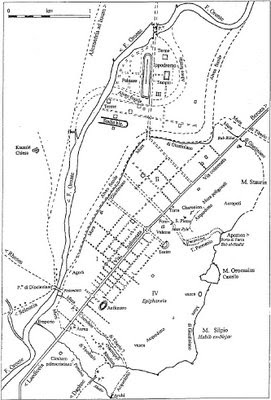 This has various implications. We know that the Island had five bridges connecting it to the "mainland" part of the city. Only one of these (that at the Dog Gate) has been identified. These bridges in the Uggeri context (though he only shows one) would be far more spread out than the bunched group of bridges that Wilber hypothesises. The Island with Uggeri's form allows the Regia to be near the Old Seleucid Town and yet still be on the Island which Wilber's plan made difficult to conceive.

The Uggeri plan almost makes both branches have roughly equal weighting, a true division of the river. As one silted up (maybe due to debris from the earthquakes e.g. collapsed bridges) the remaining branch would have had to move twice as much water, thus becoming wider and more powerful (and more erosive).

Finally we might speculate that the Duke's Gate (the Porta Ducis) at the time of the Crusades might have been a very long-established gate/bridge indeed, whereas it did not make much sense in the context of the Wilber plan.
at April 01, 2009