A "New" Representation of the City from a MSS.

Whilst cruising around new sources I discovered that the famous manuscript library of the St Gallen monastery in Switzerland is in the process of digitisation.

Tempting the fates, I searched for Antiochia and, lo and behold, found a document from 1465 with references to the city. Moreover, I discovered a fairly stunning image of the city. The document concerned is described thus:

The image is on page 131 and like most medieval representations is somewhat fanciful and pretty much unhelpful, but it is so clear and colourful that I can't resist putting it up for general consumption amongst Antiochophiles. The indexers title it as "Darstellung der Stadt Antiochia". 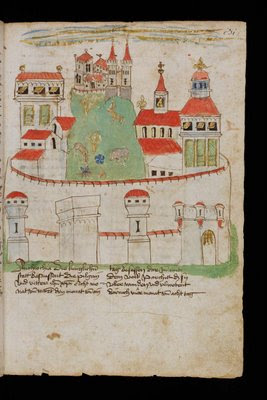 Chris, a wee thingy you may find amusing