Förster makes reference to a water reservoir and the Wilber/Downey shows it on his map. However, the map shows both a reservoir and an amphitheater in the same general vicinity. To our knowledge there are no remnants of either these days. 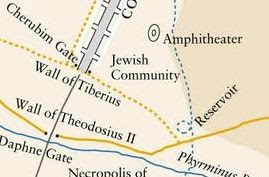 At least one of these structures still existed in 1898 when Förster visited the site. He makes the following reference to it in a footnote:

He goes on to quote Procopius in De Aedificiis:

One can't think much of ancient hygeine (who does?) to find the victims of elephantiasis and leprosy bathing in the town reservoir as a "cure"!

Then Chesney claiming the site was: "...traditionally connected with the Pagan immolations to Jupiter".

All this information is typical of the garbled historical accounts. Wilber/Downey has the amphitheater way over near the Southern wall, the Charonion is on the north side on the city. The sacrificial place for Jupiter we have heard spoken of before as being near the Temple of Zeus Keraunios. This was in Iopolis (one of the "four cities" within Antioch) and presumably also near the Southern wall.

Was this a reservoir, an amphitheater (as was so common in Roman cities for gladiatorial combats) or a naumachia (a place for mock naval battles)? Antioch surely had an amphitheatre, but why should it have been perched on the side of the mountain? That is not traditional in Roman city building. Usually the amphitheatre was on the level terrain, frequently outside the city walls. We can see why it could be either a reservoir (serving double duty as a naumachia) due to the constant flow of water along the aqueducts arriving in the city from Daphne.

"I also recognize such a water reservoir in a hollow of amphitheatral form at the foot of the present castle ruins (diameter: 70 steps), whose curtain wall consists of broken stones with filling of brick".

Not much good at Italian but:

"... in the mountain of ??? a house (tank) of water, called in Greek tongue b. lût. sa (Balaneion?) and the 'water scatusice from a hard rock; he who bathes in the water on 21 of Adar (March), ???, is cured of elephantiasis and leprosy by the permission of God Most High ".

"Theodosius had interrupted the water pipe designed by Caesar for the public bath here."

"...reports of a legend, that the Roman emperors in this basin amused themselves by boating".

"... had from this --a rock amphitheater con 90 feet in diameter, that in legend was a place of sacrifice to Jupiter -- made and set it in that near the Charonion".

Have we a reconstruction of this roman amphiteahtre?