The so-called Charonion is a carved stone bust on the mountainside towards the Beroea Gate. It faces north and looks out over the city and river. We use the word "so-called" because the linkage to Charon, the god of the underworld, is mistaken.

The limestone carving in the rock is 4 1/2 metres high and wears a veil which comes down over the forehead and goes back over the crown and then hangs down on both sides of the face. For Forster the fact that it is beardless, and looks womanly, mitigates against it being a male god, particularly Charon. 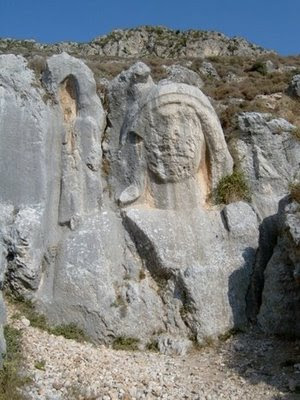 On its right shoulder stands a (badly-weathered) smaller draped figure which appears to wear a calathus, a lily-shaped basket of a type carried in processions in honor of Demeter. Although most of its current battered state is due to damage,some posit that the bust was never finished. Forster in 1898 visited the sculpture and reported that its ears, nose and mouth were destroyed.

Chesney in his Expedition for the Survey of the Rivers Euphrates and Tigris reports seeing "in the vicinity (of St John) a colossal head, probably that of a Sphinx: also a full length Egyptian figure, both in bold relief, cut in the solid rock evidently at a very remote period". Ainsworth, another visitor in the mid-1800s refers to the carving as a Sphinx, maybe taking his lead from Chesney (or vice versa). Clearly the carving does not look like a sphinx, but it was more buried at the time (being fully uncovered by the Princeton team only in the 1930s) and they were not aware of what the full carving looked like.

According to Malalas, the figure was carved in an attempt to ward off a plague afflicting Antioch. After many people had perished from the illness, a seer named Leios commanded that a great "mask" be carved out of the mountain overlooking the city, "and inscribing something on it he put an end to the pestilential death. This mask the people of Antioch call the Charonion." How quickly such a "talisman" could be whipped up even by a team of sculptors is unclear.

No inscription is visible on the present sculpture, but it may well have been lost, as noted the face of the bust has been badly damaged and a portion of the chest is missing. It is difficult to determine whether the bulk of the damage is due to any purposeful destruction (iconoclastic perpetrators of Christian or Islamic persuasions) or simply to 2500 years of weathering.

The name Charonion may indicate that the carving was intended to represent a deity of the underworld who needed to be appeased to bring to an end the plague that had sent so many souls to Charon.

Downey in his piece References to Inscriptions in the Chronicle of Malalas in the Proceedings of the American Philological Association (1935) comments:

"The use of a literary source is probably indicated also in Malalas's reference to the inscription on the Charonion, a bust carved on the side of the mountain overlooking Antioch. The diviner Laius had this relief made, in the reign of Antiochus Epiphanes, in order to put an end to a plague which was raging in the city. Malalas states that Laius placed an inscription on the monument, but does not quote it (205.12):

During the first campaign of the Committee for the Excavation of Antioch and its Vicinity, in 1932, the Charonion was cleared and studied by Professor G. W. Elderkin. No trace of an inscription was found on the monument itself, in the vicinity,or in the debris which had accumulated beneath the relief".

Perdrizet & Fossey's volume describes and illustrates rock sculptures near Antioch, unnoticed in the guide-books, though mentioned by both Chesney and Renan (C. R. Acad. Insc. 1865, p. 308), whose description is given in full. One of these sculptures is a colossal head covered probably by a Phrygian cap, but with the bust undraped. It is very badly mutilated, and Renan thought it draped. The other is a standing figure, also colossal, but not so large as the head, and apparently leaning on a lance, thyrsus, or inverted torch. Renan referred the head to a colossal Charon, said to have been carved in the rocks above Antioch to check a plague. It has been pointed out by several commentators that Charon cannot be beardless, that the two figures must belong together, that they are in a necropolis, and hence prefer to see in them Mithras attended by Attis. They prefer to explain the story in Malalas and Tzetzes as a popular legend, which had grown up after the passing of the old Greek or Asiatic mythology.

Our correspondent in Antakya, Jorgen Christensen-Ernst was prompted to comment:

"By the way, I read Malalas' explanation on Kharonion. It sounds like a "myth of origin" to me. Maybe the thing had a name that was close to Kharon. People in this corner tend to do things like that with names, some still believing in the basic magic that similarity equals identity.

I must say though that the immediate impression you get when you see the thing is that it is a man. Head covering is a matter of culture and that may have changed since it was made thus opening the way for "aberrant decoding" - to use Umberto Eco's term".

Whatever the original purpose of thec arving, it remains one of the few extant remnants of the ancient city and a chief claim to fame of Antakya to lure tourists.
at January 18, 2009