A Map of the Island

I came across the following map (click to enlarge): 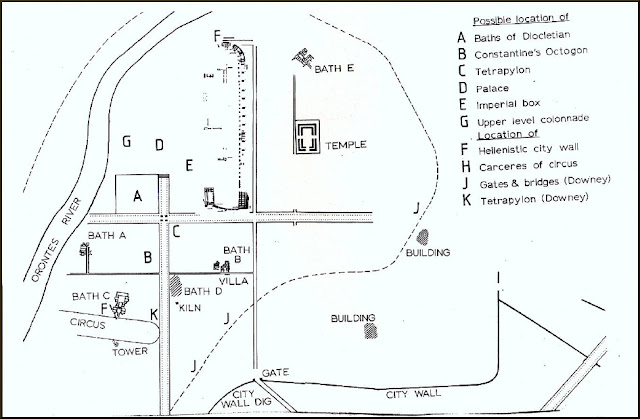 The map was in: The Palace of Diocletian at Split - A Thesis presented to the Faculty of the Graduate School University of Missouri, Columbia by Guy Dominic Robson Sanders in August 1989 and represents a refiguring by Sanders of Downey's original. This meshes with the ideas generated by the Poccardi map here.

While the map contains many details discussed by us in previous postings the layout is somewhat novel groups all the elements thus far discovered on the same map and reorients the street grid to a pseudo-north-south layout.

The dotted line (J) is claimed to be Downey's canal with bridges and gates. Maybe Downey was not privy to the aerial views which quite clearly show the canal where the City Wall is marked.

We remain of the persuasion that G & D are where the imperial palace was sited with a bridge to the imperial box at the Hippodrome. Maybe our eyesight is defective but we cannot see letter H (the carceres).

The tragedy of all this is that this area is still not built over but might shortly be subject to the creeping urbanisation of Antakya. The whole area should be declared a "historic park" and would bring the area far more tourism than it currently has.
The Palace of Diocletian at Split
A Thesis-----------------Presented tothe Faculty of the Graduate SchoolUniversity of Missouri Columbia-----------------In Partial FulfilmentOf the Requirements for the DegreeMaster of Arts-----------------By
Guy Dominic Robson Sanders
at December 21, 2019