The Island is one of the fascinating aspects of Antioch. Its origins are somewhat disputed. It is not clear if it was settled early on with the first expansions beyond the "old" city or whether it was a whole new quarter laid out in the 2nd century AD, devastated in an earthquake in 458AD, largely rebuilt after that, only to be abandoned after the earthquakes of 526 and 528 AD. 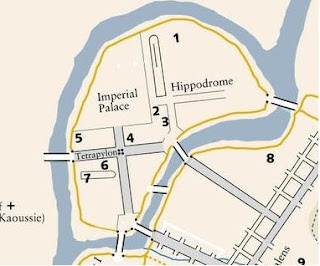 Above we show an excerpt from the map of Downey, which as far as the Island is concerned might give an idea of the layout. Research by Gregoire Poccardi though gives good grounds to believe that the orientation could have been quite different to that assumed by Downey. The numbers reflect various sites that were excavated by the Princeton team in the 1930s. Most relevant are number 6 a very sizeable baths and the exploration of the "starting" end of the hippodrome at 2.

Libanius in Oration XI had this to say of the Island:

"The new city consists of an island made by the river dividing into two. In its upper reaches and for most of its course, the river flows in a single channel, but here it splits, encircles the area and flows by it on either side. One channel can be seen between the two cities, while the other flows on the far side of the new city, and after forming the island, reunites its channel with the other and makes the river as it was before it split. The shape of this new city is circular, and it lies on ground completely level and is encircled with an unbroken girdle of wall. From four arched vaults linked to one another in rectangular formation, as though from the navel, four pairs of colonnades extend to each point of the compass - as in the statue of the four-handed Apollo. Of these, three of the colonnades reach the circumference of the wall, while the fourth is shorter. Yet the shorter it is, the more beautiful it is, for it, as it were, goes to meet the palace quarter which starts nearby, and serves as a gateway to it."

Libanius did have the tendency to long-windedness and the surprising thing on this oration is that it was addressed to the local population who presumably knew all these features very well. Here he refers to three important landmarks, the wall around the Island, the "arched vaults" and the colonnades. The "arched vaults" is a structure known as the Tetrapylon of the Elephants which we discuss in a distinct posting here.

From the Tetrapylon ran the four colonnaded avenues shown in the Downey map. At least two of these probably connected to bridges. One led to the palace gates. Downey's siting of these avenues and the arch is still a matter of speculation as there is no evidence yet on the street layout of the Island.

The wall around the island is somewhat contentious and debate remains about whether the Island was in fact walled or not. There are no visible remains of this wall. Maybe it was dismantled and material reused for the strengthening of the walls of the main portion of the city when the Island was abandoned in the 500s.

One of the spectacular features of the Island was the Hippodrome. This was one of the largest in the empire. By all accounts the Antiochenes were obsessed by chariot racing. The site was one of those excavated by the Princeton team. It was at the time one of the only recognisable structures left of the old city besides the walls. However, by then it had been reduced to a series of concrete stumps that were all that remained of the stairwells of the stadium. All the rest of the structure had been dismantled and carried away for reuse in the walled city after the Island's abandonment.

Another feature of the Island is the "temple" site. This is seen in aerial photographs and is shown best in the Poccardi article. This was a fairly massive temple with a podium measuring 107m by 71m. It has recently been the subject of testing by the only group that is currently working in the Antioch site. It consists these days of the rubble core of the structure. We have seen no speculation on which god the temple may have been dedicated to. 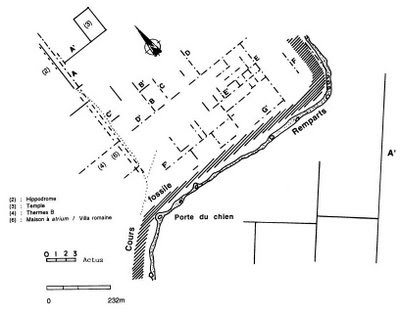 Below can be seen the current Google-Earth image of the area with a few salient structures pinpointed. This can be clicked to enlarge. If looked at carefully the silted up bed of the Orontes branch can be seen to the north of the Porta Canis (Dog Gate). 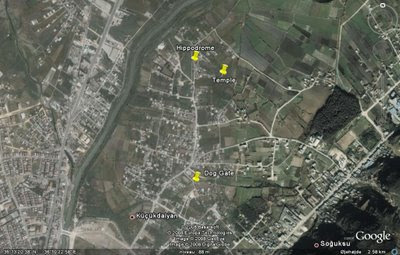 Other important sites that we shall expand upon further in the future were the Golden Octagon (which Libanius totally overlooks due to him being of the pagan party), the so-called Byzantine stadium (which might be a palestra type training field) and the substantial baths that adjoin the aforementioned stadium.

One subject to muse upon is the military component of the city. Where was the encampment? Some would point to the Campus Martius across the Orontes, but this would have us believe that a temporary army camp was the best the city had for hundreds of years. It might make more sense that a proper military installation (a castra) was located somewhere on the Island, in proximity to the Palace. This might be at the far end of the Island where no excavation work has been done as yet.

From the small sampling of houses in the Princeton excavation it would seem that the Island was an upscale neighbourhood.