Further Musings on the Palace in Antioch

I have written a number of times both directly and tangentally about the Imperial Palace which was situated in the Island Quarter of the city. There is no firm evidence for its location. Despite being one of the largest administrative complexes in the whole of the Roman Empire and home to various Emperors for short or extended periods of time, the number of concrete references to it are very few.
The main facts in positioning the structure are:

Thin pickings indeed. The information above has been employed to position the Palace at the side of the Hippodrome (in fact on the north-west side) with some sort of connection being imagined between the two structures to allow ingress and egress by the "powers that be" without them having to resort to the streets. The Palatine Palace in Rome adjoined (quite literally) the Circus Maximus and the palace of Galerius at Thessalonika was directly connected to the hippodrome. On of the best sources on the palaces of Diocletian and Galerius is "Late-Antique Palaces: The Meaning of Urban Context" by Slobodan Ćurčić in Ars Orientalis, Vol. 23, Pre-Modern Islamic Palaces (1993), pp. 67-90

Some have conjured up images of a version of Diocletian's Palace at Split, but on the Orontes banks instead of the shores of the Adriatic. Well, not a "version" almost an exact copy. This has brought with it the totally unfounded conjecture that the Palace was laid out like a military camp (in four segments) like the Palace at Split.

It is also claimed that the Palace had some sort of portico or cryptoportico facing the river, from which one could gaze to the suburbs and gardens on the other side of the river.

All these speculations may indeed be true. I take this opportunity to throw some more wood on the fire. I spent some time looking at the Split complex recently. I attach Robert Adam's reconstruction of the plan. 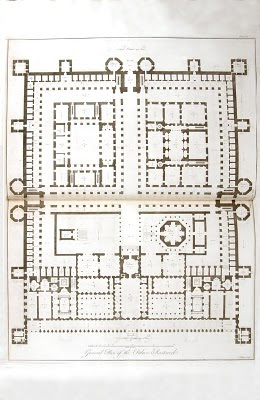 First I would note that while Diocletian finished the rebuilding of the Antioch complex, it had been started by Galerius so Diocletian was working with material that was already started. Split also was a retirement villa for Diocletian while the Palace in Antioch was a major administrative complex from which much of the Eastern Empire was run when the Emperors were in residence (or the "junior" Emperors and Caesar's during the Tetrarchic and Constantianian periods when split leadership prevailed). Thus all things being equal the Antioch Palace would have had vastly more functions than Split was built for and thus may have been significantly larger.

Did parts of the "older" iterations of the Palace survive these rebuildings? The Palatine Palace complex in Rome was accretive as have been more recent examples like the Louvre in Paris and the old Schloss in Berlin, so why should we imagine that Galerius leveled the old structures and rebuilt from scratch? Did the Palace include significant gardens? Libanius said it took up a quarter of the Island. Even if exaggerating that would have been a lot of territory to be exclusively covered by one structure. Did it include barracks? Was there a Praetorian Guard-like complex as is Rome?

Some (e.g. Deichmann) have imagined that the Golden Octagon might have been inside the Palace. This seems to rely almost literally upon the Split comparison(where there was an octagonal structure called the Temple of Jupiter) imagining the Octagon as a recycled Temple or a Heroon or Mausoleum.

Was the palace fortified? Did its river wall (if there was one) comprise part of the wall that Libanius describes as running around the Island "like a crown"? Did it need to be fortified? After all the Palatine was not fortified.... Split was fortified but it was in the middle of nowhere compared to Antioch.

Conclusion here.. none.. We do not know enough about the palace to claim it is a copy of Split or any other known structure. The main way to dispel this confusion involves a pick and shovel.

Christianity was not the state religion before Julian. I don't know what's wrong with the word "paganism", its merely a descriptive term. Finally, if Julian were in any way reflecting the will of the majority of Romans, why did he bitch so much about how poorly his revival was received?

Salve Libanii,
I am on my way to Antioch this weekend. Can I get a photo for you of any special place?
regards,
Kutlu

I am doing research on Antioch with the idea of writing an historical novel, loosely centered around John Chrysostom. I would really like to connect with the host of this site and some of the people who've posted comments. My email address is washenator@gmail.com

To Washer,
I am also involved in writing an historic novel with my protagonist living near Antioch.
I will email you soon. Perhaps we can share some information that would help us both.

love to help all those recreating the city in fiction or fact! email me..