A key text on the trading activities of the Antiochenes (and their neighbours) is the article "Commercial Syria under the Roman Empire" by Louis C. West that was published in Transactions and Proceedings of the American Philological Association, Vol. 55 (1924), pp. 159-189.

It is interesting to read in context of the aforementioned visit of Theophanes to Antioch. West though deals with the external trade of the province and as Syria was largely self-sufficient in food (grains for instance) and most fruit (besides dried versions) did not travel well, these basic foodstuffs do not figure in the external trade patterns.

I shall excerpt here the list of imports that have been documented by the historic sources. The list is Syria wide, but as the chief consumer of luxury goods (and imports tended to be luxuries due to the high transport costs) Antioch features prominently. 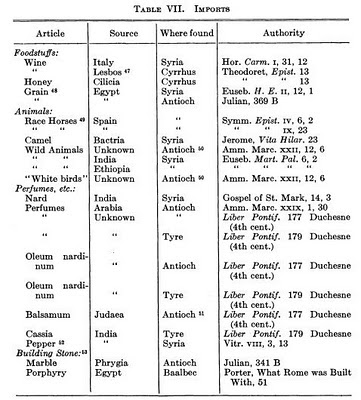 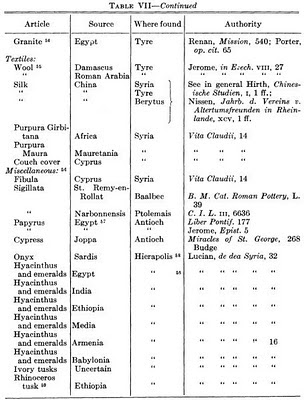 West spends much more time on exports though and a reading gives the impression that Antioch had some relevance but little importance. From my reading over broader territory I would beg to disagree. West concedes to Antioch an export source for wine and olive oil, though this would have been the surrounding countryside rather than the city. In medical remedies, he mentions the city as the source of "oil of lilies" and oenanthe (a product that went into around 21 potions). The city was mentioned as a source of race horses (though this may have been training "value-added") and camels were said to come from city, as did geese and poultry. John Chrysostom mentions the city as a producer of copper goods.

While the import lists show Antioch as an importer of perfumes I would suggest that it was more of an importer of ingredients for Antioch was renowned as being a producer of perfumes for exports. Likewise it was an important center for silver and ghold jewellery production, which necessitated the import of the precious metals for conversion in the end products. West doesn't credit the province with much in the way of mining but in fact, Kisladag, just a few miles north of Antakya has been a gold mining site since Roman days and still is exploited in a desultory fashion.

The city certainly wasn't a silk production center but may have been a source of value added, such as embroidery and making up into clothing articles. West makes no mention of textiles from Antioch but we know the city was a major wool center with the Fuller's Canal, which I have dwelt on before being a major industrial complex the likes of which was not seen again until Britain in the Industrial Revolution. There was also the very important tanning industry, which if we hazard a guess must have used goat and pig skins as a major input. If we cast our minds back to the sticky end met by Euphrasius in a vat of tar/wax used by wineskin makers then one can find at least one outlet for goatskins.

West concedes that Antioch was an important center for arms manufacturing due to it being a leading base for the Eastern Armies on the Persian frontier.

A. F. Norman also writes in his article, The Book Trade in Fourth-Century Antioch
in The Journal of Hellenic Studies, Vol. 80, (1960), pp. 122-126, of the importance of the publishing industry. Antioch was clearly a major site for production of Greek language books for the Empire.

One should also not lose sight of the city as an exporter of carved and sculptural works (including sarcophagi) from its workshops reflecting the high standing of its craftsmen.