The Palmyrene Period in Antioch

I stumbled upon a map this week which showed clearly the extent of the Palmyrene "empire" at its largest. Here it is: 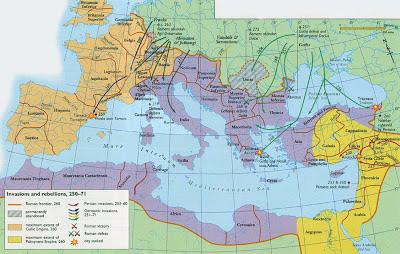 As can be seen this brief flourishing out of the desert was not only extensive at its most successful moment but it also encompassed Antioch, which was far more central to this "empire" than Palmyra itself.

While there are many books on Zenobia and her family, not many of these mention extensively the effects for Antioch. Thus it is most useful to quote at length from Glanville Downey's "A history of Antioch in Syria: From Seleucus to the Arab conquest", Princeton, N.J., Princeton University Press, 1961. Here he offers the political background, where essentially a power vacuum, allowed the Palmyrene vassals of Rome an opportunity to step into the breach and then become over-confident:

"The capture of Valerian in midsummer A.D. 260 and the second taking of Antioch by the Persians later in the same year left Syria and the remainder of the East at the mercy of Persia. Gallienus, who had succeeded Valerian, was fully occupied in the West, and could do nothing against the Persians. One of Valerian's generals, Macrianus, with the support of the praetorian prefect Callistus (nicknamed Ballista), took this opportunity to proclaim his sons Macrianus and Quietus emperors, and Ballista succeeded in driving Sapor back to the Euphrates. Macrianus and Quietus were recognized as emperors in Syria, and they issued coins in Antioch. The emperor Gallienus, however, defeated Macrianus and his son when they tried to establish themselves in Europe. Gallienus himself could not go to the East or send troops, but he now gained support from the prince of Palmyra, Odenath.

For some years the Palmyrenes, realizing the weakness of the Romans in Syria, had been trying to establish their independence, and Odenath saw an opportunity in the situation that had developed by A.D. 260. He first approached Sapor, but being rebuffed, he decided to support Rome, and proclaiming himself king of Palmyra he marched against Sapor and inflicted a severe defeat on the Persians. Gallienus in gratitude gave Odenath the title of dux and appointed him to the supreme command of the Roman forces in the East. Odenath proceeded to win control of most of the cities of Syria, and defeated Ballista and Quietus, who were killed, late in A.D. 261 or early in 262. Syria was thus nominally brought under the control of Gallienus, though Odenath was the actual master of the East, and it was Odenath and the Palmyrenes who saved the eastern Roman Empire from the Persians. In A.D. 262 Odenath invaded Persia with an army composed of Romans and Palmyrenes, and penetrated as far as Ctesiphon. Gallienus then granted him the title of imperator. In A.D. 266/7, however, a dynastic plot against Odenath was formed, and he was assassinated. He was succeeded, in the government of Palmyra, by his second wife Zenobia and his infant son Waballath. Gallienus, in an effort to check the power of Palmyra, withheld from Waballath the Roman titles that had been conferred on Odenath, so that in theory Waballath was merely king of Palmyra. Zenobia, however, remained in actual control of Syria.

During this period Antioch was at first for a brief time under the nominal control of the regime of Macrianus, and its mint issued coins for the younger Macrianus and Quietus. After Odenath established himself as master of the East in A.D. 261 and 262, Antioch (with the rest of Syria) came under Palmyrene domination, though it remained nominally under the rule of Gallienus. Coins of Gailienus began to be struck at the mint of Antioch in A.D. 263.

At about this time Gallienus was assassinated (March A.D. 268) and after a brief interval Claudius II (A.D. 268-270) established himself as emperor. Claudius at once found himself absorbed with checking the Goths in the Balkans, and his only known activity in affairs in the East seems to have consisted of a refusal to grant Waballath the titles that Gallienus had given Odenath. Antioch remained outwardly under the control of Claudius; during his reign, the mint struck only coins in his name, though the types of the coins were apparently influenced by Palmyrene ideas. As Mattingly points out,'" "it suited diplomatists on both sides Roman and Palmyrene - to pretend that the rule of the Roman Emperor continued unabated."

The situation was altered when Claudius died in Sirmium of the plague in January A.D. 270. For a few months his brother Quintillus was recognized as emperor, but Aurelian, a famous general, quickly displaced him. One of Aurelian's first problems was the question of the spreading power of Palmyra. Whether Aurelian at first, being occupied in Italy, felt that he had to make concessions, at least for the time being, or whether Zenobia took the initiative in an attempt to increase her son's power and dignity, is difficult to decide.

A German invasion of Italy, and a rebellion in Rome in A.D. 271 suggested to Zenobia that this was a favorable moment to make a final break with the Roman Empire and to assert the complete independence of Palmyra; and at some time between ix March and 28 August A.D. 271 this was done. Waballath took the title of Augustus and had appropriate coins struck at the mints of Antioch and Alexandria. Simultaneously there appeared coins in which Zenobia was styled Augusta.

Aurelian took action in the summer of A.D. 271, sending the future emperor Probus to reconquer Egypt, which the Palmyrenes had occupied. Later in the same year Aurelian himself proceeded by way of the Danube and Byzantium to Asia Minor, which he reconquered in the early part of A.D. 272. A substantial force of the Palmyrene army under command of the general Zabdas and accompanied by Zenobia herself, was waiting in Antioch, which Aurelian could be expected to make his first objective in Syria.

Aurelian, apparently planning to circle about Antioch and cut the escape route to the south, did not approach the city by the direct Pagrae-Antioch road, but took the route which skirted the eastern side of the Lake of Antioch. From this he would reach (via the road to Gindarus) the Antioch-Beroea road, along which he could move on Antioch from the east. Somewhere along the Antioch-Beroea road east of the crossing of the Orontes at Gephyra (mod. Djisr el-Hadid) the Romans encountered a large force of Palmyrene cavalry. This seems to have represented a major part of the Palmyrene forces at Antioch, dispatched by Zabdas when he learned of the Romans' approach.

On learning that he would have to face the Palmyrene cavalry, Aurelian detached his infantry and sent it across the Orontes, presumably because he knew that it could not stand against the Palmyrene horse. He ordered his cavalry, which he knew was inferior to the enemy's, not to offer battle at once, but to simulate withdrawal, so that the Palmyrenes might be worn out with the heat and the weight of their heavy armor. The Romans fell back along the highway toward Immae, a village which lay in the direction of Beroea, and when it was seen that the Palmyrenes were fatigued, the Romans turned on them and won a complete victory. Those of the Palmyrenes who could do so, escaped to Antioch. Zabdas probably realized that the people of the city, on learning of the disaster, would rise in favor of Aurelian, whose clemency during his recovery of Asia Minor had doubtless become known in Antioch; besides, knowledge of the superior power of the Roman army would turn the local population against the Palmyrene regime. Zabdas therefore, in order to gain time and to prevent any attempt by the inhabitants to interfere with his withdrawal, immediately after the battle let it be known that he had defeated and captured Aurelian, and paraded through the streets a man who resembled the emperor. The trick succeeded, and Zabdas and Zenobia were able to flee from Antioch that same night with the remainder of their forces, leaving a rear guard behind them. Evidently they went by the road which led through Daphne to Seleucobelus and then to Apamea, whence they could have gone via Epiphania to Emesa.

Apparently Aurelian had not been able to occupy this road. The Palmyrene rear guard established itself on a height above Daphne, probably that on the left of the road (as one goes south) which rises above the valley where the springs are located. Occupation of this position would slow down, at least, the Roman pursuit of Zenobia and her people. On the next day, when he learned of Zenobia's flight, Aurelian gave up his plans for an infantry assault on Antioch and entered the city, receiving an enthusiastic welcome from the inhabitants. Finding that many people had fled the city in fear of punishment for their having sided with Zenobia, the emperor proclaimed an amnesty and had copies of the proclamation circulated in the surrounding areas, upon which the refugees returned. It is a tribute to the strength of Aurelian's military discipline that he was able to keep his troops from plundering the city. The Palmyrene rear guard was easily dislodged from its stronghold at Daphne and annihilated. Aurelian then issued such orders as were necessary concerning the internal affairs of the city".


What Downey does not mention is that Odenath (and his son by a previous marriage) appears to have been murdered in Antioch, showing how the city had become one of the dual poles of Palmyrene power. Gayle Young in here thesis "WORTHY WARRIOR QUEEN:PERCEPTIONS OF ZENOBIA IN ANCIENT ROME", Georgetown University, Washington, D.C., 2009 maintains:

"...Odaenathus did not have long to savor his remarkable victories or his elevation to King of Kings. He was killed shortly afterwards in Antioch by a relative, along with his elder son and heir, Herodes. There was some speculation in the ancient histories that the Emperor Gallienus, becoming fearful of the Palmyra’s military might, conspired to have Odaenathus secretly assassinated. The inconsistent SHA* first blames the king’s death on revenge by Persian gods, but then states that it was a conspiracy orchestrated by Zenobia to ensure that her son, rather than Herodes, inherited the throne. Zonaras, writing in the 12th century from sources now lost to us, has the most credible version of the murder, stating the royal father and son were killed by the king’s disgruntled nephew who had been punished for misbehaving during a family hunting expedition". Apparently, Zonaras contends that, while hunting with the king, the nephew killed beasts before the king had a chance to do so - a breach of etiquette that led to his brief imprisonment. When he was released, the nephew killed the king and Herodes with a sword during a family dinner.