Some time ago a comment was left on a post that referred to a project that the commenter was working on to create a recreation, using CAD/CAM software, of the city of Antioch in its glory days. The commenter was I think in Japan or Thailand but could never get any more detail as they never left an email address.

Now up pops a comment from Dr.Kayhan KAPLAN, at Hatay's Mustafa Kemal University, on one of my weekend postings that indicates that he has recreated the city from four different angles using computer graphics. Frankly it is a major contribution to visualising the city and a great start to the task of making Ancient Antioch real for people for whom a  map is a mystery. 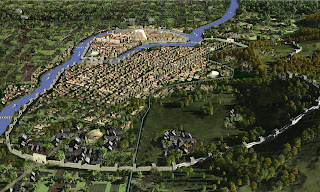 The recreation is obviously modeled on Wilber's map. I now subscribe to the Poccardi and Uggeri visions of a longer pointed island towards the southern end rather than Wilber's "roundish" island.

Some comments I would note:
This is truly a great job and certainly something the raises the challenge of getting some real digs going to underpin this vision. In the good old days, Dr Kaplan might have been cheered along the Colonnaded Street for this job!

Thanks for this exciting news. I've picked it up on my blog; see The Glory Days of Antioch"

Any idea where we can see this 3D rendition these days? Apparently the site is no longer up.