Delving into the realms of the really obscure we stumbled upon an article titled Antiochenisches Kunst in the Italian journal Oriens Christianus of 1902. This article was written by the influential, if controversial, art critic Josef Strzygowski, a leading light in his time. We don't know enough of his work to comment and certainly whatever his bias was it didn't come through in this article about the very prosaic subject of two columns that stand in the Piazza San Marco in Venice. These columns are known as the Pilastri Accitani as they were looted in the 12th century from Acre by Venetian Crusaders.

Strzygowski zeros in on these columns because they are examples in his view of late antique Antiochene artistry. They are indeed splendid creations. We reproduce a photograph of one of them here. 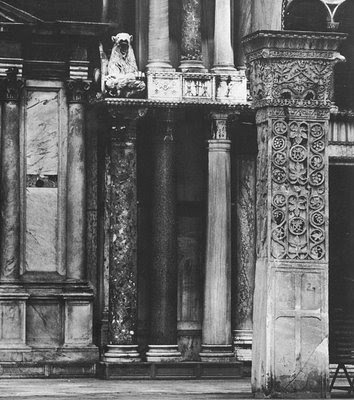 His focus, beyond the elaborate decoration, is on the sculptor's seal/monogram on the column. This seal can be seen in the middle section of the column in the central panel with two examples.

Here it is up close:

In his opinion, this elaborate little symbol is a combination of the consonants, N,T & X and represents a sign to the observer in the age when it was created (originally for the church of Saint Saba in Acre) that the artisan was from Antioch. The rest of the seal's details elucidate the identity of the long-lost stone worker who carved the column(s).

We include this detail here because, somehow, somewhere, at some moment, some decent example(s) of Antiochene sculpture will be brought to daylight and when this occurs, the appearance of a similar symbol somewhere on the work will give away that this too was a work from a master craftsmen from ancient Antioch.
at February 21, 2009

Fascinating (especially the theft of columns from one Christian church to another :-), and the sculptor's seal -- if that is what it is -- but are there any other examples where N, T & X stand for Antioch?

Here are Strzygowski's own words:

The original is here...

...with the "Buchstaben" that got lost in the plain texting of Google Books.. He goes on to explain his logic and mentions on the prior page some references for stonemason's marks.

Ummm, stonemason's marks are usually unobtrusive. This could hardly be more 'in your face'. Anyway, it's a possibly but not very convincing opinion, imho.

I was a bit stunned also to see how prominent the "artist" pushed his trademark on his output...subtle it is not.. what else might one posit it is?

At a guess (and I know nothing of early eastern Christian architecture), it would be either the patron, who paid for the work, or the presiding bishop; or both. What do you think?

I think you could be right... even Leonardo didn't put his signature under the Mona Lisa's chin and this sign is pretty prominent. A stone mason's mark wouldn't be so prominent.

I wonder whether, in this case, the sign might be from an Antiochene source (the patron/bishop) or may have originally been located in Antioch and shifted somehow to Acre. Strzygowski doesn't muse on the items' age but even to a rank amateur like myself it looks like Golden Age material 400-600 AD not from any date vaguely near when the Venetians looted it.. Also the mark may be of an Antiochus, rather than something signalling Antioch..

I like the idea of an Antiochus. But, now, which Antiochus in your very likely time frame?

Any old Antiochus, I presume.. apparently the locals liked the name (was the Kyle or Britney of its day in Antioch).. but.. did the name still have much currency in the Christian era?

I wondered whether the pilasters may have been reused from some secular source.. maybe the crosses on the bottom sections were recarved from whatever original decoration was there.

Acre was the city of Ptolemais before its reincarnation as Acre, the Crusader (pirate) port par excellence..