We discussed elsewhere the excellent publication by Guillaume Rey called "Etude des Monuments de l'architecture militaire des Croises en Syrie" of 1871. In the book there is a splendid map dating from the 1850s (we believe) which may predate the destruction wrought by Ibrahim Pascha. Its too large to merge together or show in its original format across two pages so we divided it in half and include it (click to enlarge) in a special posting here: 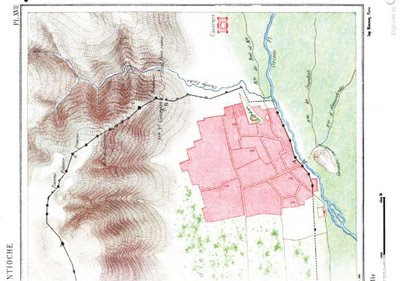 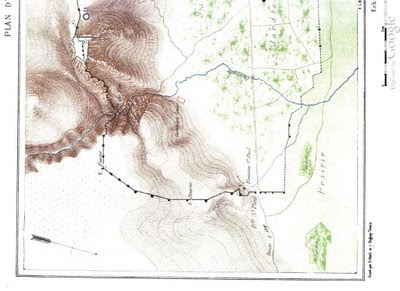 This map shows the position of the towers on the wall. It also shows two springs (including that of "Olympias" at the Beroea Gate). It is intesting to note that the St George's Gate is not in line with the Colonnaded Street (or its predecessor). How this gate came to be the principal egress to the southwest instead of the Daphne/Cherubim gate is not something we have ever seen explained. Neither have we seen any image of the St George's Gate before its demolition.
at December 24, 2008

Wow. That throws a monkey wrench into my construction project. I was using Casana's map (well, outline) to make a 3D version, but I can hardly ignore a map that has the towers and gates already in place. Well, back to the virtual drawing board.

whatever I can do to help just ask... I had sent an SOS out on Google Sketchup a while back to see if some competent person out there wanted to undertake the task of making a 3D Antioch in the same vein as the Rome project.. no replies thus far.. so the franchise is yours..

I have also been working on a street map.. to show all the streets.. not just the sketchy (and incorrect ones) that Wilber put on his map. We can coordinate on that..