Antioch was a a city of varied water features. The springs of Daphne and the intricate aqueduct system provided an abundant source of supply for this most Roman form of street architecture. Nominally they were supposed to shrines to the Nymphs but in reality were soothing and diverting gathering spots which allowed benefactors to be immortalised. Libanius made much of a centrally-located Nymphaeum (attributed to Tiberius) that subsequent scholars have attempted to place at the junction of the Colonnaded Street and a major avenue heading off towards the Island and its Palace district. The hunt by the Princeton Expedition for this site proved fruitless. In their estimation this junction and its water feature were somewhere in the vicinity of the "Forum of Valens" and the Parmenios crossing of the Colonnaded Street.
In the disappointment at not finding this edifice, little attention was given to an interesting discovery by Jean Lassus at a secondary site only a few blocks north of where the Forum of Valens was believed to lie. While Lassus had a focus on the main street, in this one exception he diverted off slightly towards the Grotto of Peter and the Charonion into a parallel thoroughfare. The site he worked with was made difficult because he was not allowed to excavate under a road that ran perpendicular to the Colonnaded Street and thus it cut through the dig and restricted operations. Lassus wrote up his 1930s discovery in the 1970s when the belated last volume of the dig reports was published. By then most of the other participants were long gone.

What he had discovered was a Nymphaeum, not monumental as they had hoped but nevertheless sizable. It dated, in his opinion from the time of Justinian when major renovations took place after the devastating earthquakes of the 520s A.D. Thus this was 150 years after Libanius had indulged his rhapsodies on the much larger Nymphaeum. Lassus's discovery consisted of a large courtyard which was 21.75 metres wide and 11.50 metres across. Along the long side ran the Nymphaeum which occupied the whole long side except for 1.5 metre passages at either end. The plan of this structure is shown below.

The structure consisted of an ornamental wall with rounded and rectangular niches (for statuary?) and a long basin in front of the wall. The basin was one metre wide and 70 centimetres deep and ran the length of the wall (i.e. nearly 20 metres). The wall was made of brick and had at the bottom a footing of 1.25 metres in height that consisted of low pilasters. On top of this was another wall, slightly less thick in which the niches stood. The total height was unknown due to the wall having been demolished above 1.34 metres. Water arrived at the basin via a channel along the face of the wall. Water came into the structure by piping feeding from the west and then ran out of the basin into other piping where it ran away into the city drainage system.

The Nymphaeum was quite a delicate structure being less than a metre thick in places. It was protected behind by a very significant wall, which Lassus muses may have been dated back as far as the earthquake of 115 A.D. which was designed to protect against downward slippage of the hillside behind it. There were mosaics on the pavement of the courtyard and Lassus indicates that the side walls of the courtyard (while of brick) showed signs of marble cladding at some earlier time.

Lassus does not speculate on what this structure may have been. A mere shady spot away from the city bustle? Part of a larger complex, baths for example? It is doubtful that it is a private retreat on such a large scale. So, in reality, the excavators did find a Nymphaeum, monumental maybe not, but certainly a structure of quality and subtlety, no less than we would expect for the rarefied denizens of Antioch's better parts... Recently a thought struck me while reading Susann Lusnia's excellent study of the Septizodium (in the AJA) in Rome. This structure was initially (and still is in some quarters) believed to be a nymphaeum but she makes a case that a septizodium is actually a form of fountain that is dedicated not to the nymphs but to the seven planetary bodies. We went back to the cross-section (shown below) of the structure under discussion here and noted possibly six niches but the crucial middle part of the structure is mere conjecture since it was unexcavated under the roadway.

Thus I would not entirely discount that there may have been seven niches rather than six and the fountain may have been a septizodium. This possibility should not be dismissed out of hand as we have noted elsewhere that astrology and planets figured in both the thinking, and some of the structures, of the Antiochenes.

I recently stumbled upon Lanckoronki's magisterial work, The Cities of Pamphyllia and Pisidia. This lead came from Spano's work of the Nymphaeum of the theatre in Antioch. While Spano did not discuss the Lesser Nymphaeum at all (Lassus did not write up the discovery until 25 years after Spano wrote), the stunning thing for me was the likeness between the ground plan of the Lesser Nymphaeum and that of the Nymphaeum in the Agora at Aspendos. This is pictured below: 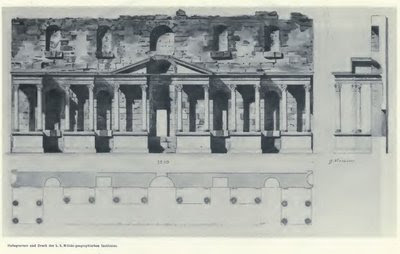 The Aspendos version has a similar array of multishaped niches and measures about 50% longer (it was 33.5m by 15m in height) than the subject of this commentary. It is tempting to imagine that the Lesser Nymphaeum was a scaled down version of the Aspendos model.

Hello, nice work, interesting reading. Could you, please, write the sources you´ve studied from? Thank you!

Hi! Very nice and detailed work! I'm an architecture student from Antioch. I'm working on a project on the site of this nymphaeum and I would like to ask some questions. Please contact me ezgi.hoc@gmail.com