On Caravans and Camels

When Jacques Weulersse wrote his work on the street patterns of Antakieh in the early 1930s the memory of the camel trains to the town was very fresh. In fact this means of transport had only faded away ten years before in the first year of the French Mandate when the break-up of the Ottoman Empire meant that "free trade" across the region was thwarted and the camel trains no longer connected together those far-flung parts of the faded Empire that used to buy and sell from Antakieh. In their sunset years, the camels had primarily moved soap, the main local product, to the four corners of the Ottoman domain.

The infrastructure was still in place and this consisted of the khans where the traders and their beasts stayed and the specialised souqs where the goods were traded. With the end of the camel trains came also the extinguishing of an activity that had been undertaken in the city since its founding in 300 B.C.

Antioch was a great commercial centre in its heyday and a far cry from the soap and leather-focused provincial backwater that Antakya had become. To get an idea of the intense interchange of goods between Antioch and the rest of the Roman Empire and beyond, the best source is Commercial Syria under the Roman Empire by Louis C. West in Transactions and Proceedings of the American Philological Association (Vol. 55 1924, pp. 159-189) Despite the work being amazingly detailed and encompassing, the one thing that author does not discuss is how the goods moved around.

The map below shows the chief trade routes of the Syrian region of the Roman Empire. 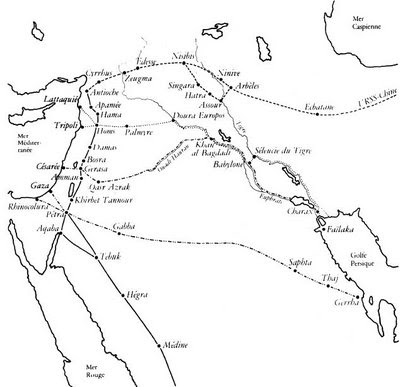 Antioch in its heyday was one of the chief entrepots of the Roman Empire as far as the China trade was concerned. Friedrich Hirth is his book, China and the Roman Orient, researches into their ancient and medieval relations. as represented in old Chinese records. Leipzig, 1885 sheds a totally new light on the Antioch story because he finds references to Chinese visitors who made it to the Roman Orient and carried back their views of what they had seen and put them to paper. An important component of this trade was silk, which arrived in Antioch and was then sent down to the Lebanese coast which was the main production centre for Tyrian Purple dyes for silk.
Interesting to note also is that the Byzantine Empire moved silk production to Constantinople thus removing the middleman role of Antioch in this trade. Also we would note that the China trade fell off heavily after Diocletian when the Roman Empire ran short of gold to fund its purchases in what was mainly a one-way trade situation with China.
It would indeed be interesting to find "China goods" if ever excavations of Antioch's ruins can be revived.
With the waning of the Roman Empire and its demand for luxury goods there must have been a severe crimping of Antioch's role as a trade centre and as an industrial converter of raw materials from the East into products for the rest of the Empire. Such was the city's importance in its heyday that the traffic in camels must have been truly enormous through and around the city.

In Waage's volume on the Pottery and Coins from the Princeton Excavations there is a small section on the Chinese ceramics (pp. 104-106), most of which date from the T'ang and Sung dynasties, that is about 7-13th centuries. Unfortunately, more specific dating or other statistical information is not given (such as quantity). Most of the Chinese pottery comes from southeastern China. The appearance of Chinese ceramics in Early Islamic and Middle Islamic (Medieval) levels would not be surprising, but Chinese imports from Roman or Byzantine levels would be exciting.

That is VERY interesting.. of all the Princeton volumes that is the only one I hadn't read thinking the coins and lamps were boring stuff.. well-spotted!