A great colonnaded street, a Via Triumphalis, was not a rarity in Roman cities. Ironically, the city that most conspicuously did NOT have one was Rome. There the streetscape was more one of interconnected open-spaces, plazas, forums and enclosed porticos that sprawled across the level parts of the city.
Antioch had its great colonnaded street (and various other colonnaded thoroughfares of minor import) as did Alexandria and Constantinople and lesser cities such as Apamea and Palmyra in the general vicinity and other places as far flung as Lepcis Magna and Ephesus.

The chief work which discusses the colonnaded street of Antioch is the belated review (Les Portiques d'Antioche) by Jean Lassus of the excavations along at the street during the 1930s. This he wrote up in the 1970s rom notes and recollections and it remains the definitive work. Curiously the street still underlies the main throughfare heading out of modern Antakya in the direction of the northeast. However as the Lassus volume shows the direction may remain the same but the intervening millenia have buried the foundations of the first street in some places (in the oldest part of Antakya) at over 11 metres (33 feet) beneath the modern route. The greatest difficulty that Lassus came across was this fact that the route was overlaid by a busy thoroughfare. It was only at the margins that he could dig in some sites and the best luck he had was when some major roadworks resulted in a temporary devaition which allowed the momentous discovery of the point where the Parmenios was channelled under the main avenue and presumably the Forum of Valens.

The colonnaded street was three thousand four hundred metres long and was collectively a work of various emperors and benefactors. Most commonly attributed the credit for the first conversion of the route to its monumental status is Herod the Great. Scholars have speculated as to why he should have been so keen to make this massive expenditure for the paving and the construction of the colonnades of a city which he did not rule.

The colonnade did not run through the then centre of the Seleucid city but rather skirted the walls and ran through the Epiphania extension of the city connecting the southern Daphnetic Gate to the Beroea Gate at the northern end of the city. In the middle of its length the street angled slightly which resulted in there not being an uninterrupted vista from one end to the other. This may have been forced by the presence of the Parmenios crossing or may have been a visual effect to ensure that the vista was not too long and ultimately unimpressive. Both the Mese in Constantinople and the colonnaded street in Palmyra had at least one angle which allowed the positioning of important structures or open spaces/complexes. Haussmann would have approved.

We deal with some of the layout issues of the city in the chapters on the Street Layout of the city and the Forum of "Valens" zone.

The colonnaded street had various iterations. Of course, it was under permanent maintenance over the eight centuries when it was most central to the city's urban fabric but it did have major revisions which are attributed to Herod, Tiberius, Antoninus Pius and Justianian. The latter two rebuilds were as a result of earthquake damage and resulted in the level of the street being raised substantially upward. Lassus holds the view, from his excavations, that the street had its apogee after the Antonine rebuild and at that time it consisted of a 9 metre wide roadway with 9 metre wide porticos on either side. This gives a rather impressive thoroughfare with nearly 100 feet of width. The colonnades were illuminated at night according to Libanius and thronged with people until very late. Lassus also notes that there were formalised stores facing into the porticos, at least in the main Epiphania commercial district. These were 6 metres deep. There may also have been tradespeople vending in the porticos from less formal stalls. Below can be seen a cross-section from Lassus's work. 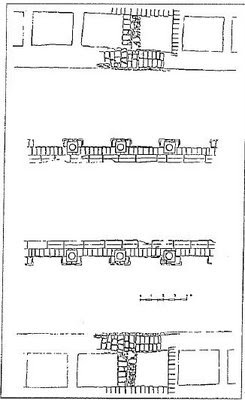 Below can be seen a schematic from Lassus' seminal work Les Portiques d'Antioche. He undertook a variety of digs along the street. The most significant being at the Parmenios crossing and at the Savonerrie. This latter was a soap factory in the 1930s but ironically is now the most upscale hotel in Antakya. The owner at the time graciously let Lassus' team dig up the extensive courtyard facing the road to get access to the ruins. Here we see the nine layers that Lassus identified at this point the lowest being 11.2 metres below the street level of the 1930s. The diagram is best enlarged by double-clicking it to improve details. 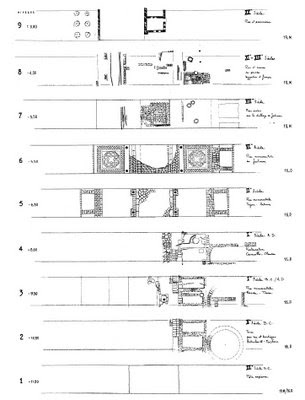 The heyday of the street was Level 5 in the Antonine period. A key thing to note is that the modern day street in Level 9 now lies over the side aisle of the original street in its heyday. Through a process of encroachment (which many have noted as being a common degeneration of former streets in the Roman East from their original width into the narrow souq format of the last thousand years) the original street was built over and much restricted in width. This process began after the final restoration of the colonnades by Justinian in the 6th century.

Some feel that the street may have had plazas or tetrapylons or combinations thereof at its junctions. Lassus speculates that these may have only been at the most important junctions. Below can be seen the "Rondpoint" unearthed by Lassus under the Habib al Nejjar mosque. 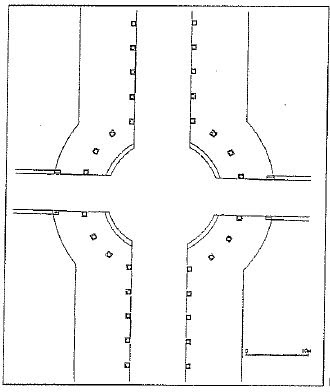 As we noted in the Street Layout article the Hippodamian plan of the city was on a per strigas basis with the narrow ends of the blocks facing the main street with the long sides facing the side streets. This means that there would have been a very large number of junctions along the colonnaded street. It could be imagined as somewhat akin to the street pattern of Fifth Avenue in New York today.

There was reputedly a large plaza where a statue of Tiberius was set up on a column. There was also a plaza where the omphalos stood (though some put this on the Island). In some versions the Nymphaeum also stood at a major junction. Whether this stood in the middle of the street or framed the view up an avenue coming from the Island is not established.

While not a single full column, base or capital was discovered, some column drums were unearthed. These evidenced that the columns were 58cms to 65cms in diameter, indicating a full height of around 6 metres (before capitals, cornices,architraves etc). On the scale of things this is quite substantially less than the 9 metre columns of the Palmyrene colonnade, however, as Lassus points out (from the evidence of the spacing), the Antioch colonnade would have had an enormous requirement in stonework with around 700 columns on each side of the street giving a total of 1,400 columns, minus some deductions for street junctions and other gaps in the colonnade.

A pending issues is how important structures along the street were dealt with. Did the street open out into the Forum of Valens or did it skirt along the edge? Did it become a one-sided colonnade when it got to the forum? In other places it must have had major public buildings placed along it (possibly the Bouleterion and temples) and so did the colonnade break in front of these or was it an unbroken line of columns for all its length?

Much remains to be answered. The frustration that Lassus felt is palpable in his review written for ANRW. He was on the verge of tying the street to the Forum of Valens at the Parmenios tunnel excavation when political factors forced the end of the dig. As he notes, despite all the cross-sections the team made, not one encountered a street junction with the transversal streets.This was somewhat understandable as the excavations were limited in size and the "narrow" ends of the blocks were a sizeable 58 metres. Thus it was easy to "miss" a junction.

This left unanswered issues as to the side streets' width and how the colonnade dealt with these "interruptions". Even worse, in his view, was not finding any of the major streets that crossed the colonnade. They had been almost certain before beginning the Parmenios dig that this was the place where the main avenue to the Island intersected and yet no trace was found.