There were 18 tribes or wards (phylae) in Antioch. The individual phylae were led by an epimeletes (or supervisor/overseer/governor). The phylae were used as electoral divisions for sending representatives to the Bouleterion (city council) for the civic administration.

Sir William Ramsey comments in the Journal of Hellenic Studies (Vol XXXVIII, 1918, pg 185),: "Certainly in various cases the tribes in a Hellenic city of Greece or Asia Minor had an ethnic character, and one nationality was often enrolled in a special tribe. This classification was often carried out in a very arbitrary fashion; e.g. Josephus mentions that all the Jews in Syrian Antioch were enrolled in the tribe Makedones, which was of course the most honourable of all in a Seleucid city".

This is the only reference to the name of one of the tribes that we have seen, excepting the possibility that some of the benefactors of the Fuller's Canal were also the names of tribes.
at May 15, 2009 No comments:

Chrysostom's Brush with the "Magic" Police

Robert Wheler Bush relates in his The Life and Times of Chrysostom:
"A most severe decree against all who directly or indirectly practised any arts of magic, or who were in possession of any books of a magical character, had been passed by Valentinian and Valens. This decree was being enforced at this time with great rigour and cruelty at Antioch. Those charged— often times on the most frivolous grounds—with any complicity with such practices were liable to exile, torture, and even death. Soldiers were employed in carefully searching for suspected persons, and dragging them before the legal tribunals. Informers, too, abounded on every side. And not only soldiers and informers, but judges also were eager to court imperial favour by carrying out the decree with rigour and severity. No age or sex escaped. The prisons, not only in the capital, but also at Antioch, were filled with persons of all ranks and professions charged with offenses connected with magical rites, or with having in their possession books either actually bearing on magic or supposed to bear upon it. Men, in their terror, destroyed their whole libraries in order to avoid all suspicion.

When such was the state of feeling at Antioch in connection with magic, it happened that one day Chrysostom and a friend were walking on the outskirts of the city, in the gardens by the banks of the Orontes, towards the chapel of the martyr Babylas. As they were proceeding along the margin of the river, they saw some leaves of a book floating down the stream. In emulous sport they tried to catch the leaves as they passed along upon the surface of the water. They succeeded in securing some of them, when, to their consternation, they discovered that they were filled with magical signs and symbols. At this critical moment a soldier was observed approaching them. What could they do with those fatal leaves ? Should they hide them about their persons, or cast them back again into the river? If they hid them, the soldier might prosecute a search, and discovery might lead to the most fatal consequences ; if they threw them into the river again, the soldier might see the act, recover the leaves, and fasten a charge upon them for having had such a book in their possession. They hesitate in alarm as to their course of conduct, rapidly weighing and balancing in their mind the probable effect of either line of action. At last they determine to commit those perilous leaves once more to the river. Fortunately for them their conduct was unobserved by the soldier, who passed on in ignorance both of their terror and of what they had done. They thus escaped; but the fears of Chrysostom were greatly excited by the event, and he could not refrain from attributing his escape to the merciful providence of God".

The above is a rather embellished version in the Victorian taste. The more basic bones of the story, as related in Florent Heintz's essay on circus curse tablets ,is to be found in Patrologia Graeca Vol 60 pg 275.

The whole little incident is interesting as it gives the rather odious Chrysostom an almost human aspect, well at least as a child/teen.

It is also interesting to note they were wandering along the Orontes bank near the shrine of Saint Babylas that was identified as being on the right bank of the river, opposite the imperial palace.

The timing is also interesting for it is around the time of the "witch hunt" (quite literally) that was let loose with particular ferocity in Antioch by Valens in his fear that magic was being used to divine when his reign would come to an end. These events are well described in the essay "Les procès d’Antioche de 371/2 (Ammien Marcellin 29.1-2) : un cas de persécution religieuse?" by Éric Fournier.
at May 02, 2009 No comments:

The only bath of substance fully delineated as yet in Antioch is the so-called Bath C. It adjoined a "Byzantine hippodrome" as some have termed it, which looks more like a grandiose palestra. Above is a floor plan of Bath C. This bath stood on the Island in relative proximity to the Imperial Palace. It was fully excavated by the Princeton team and represented the most complex and substantial building found in the project. The building was around 40 metres wide and sixty metres deep from the street facade. Poccardi posits that the blocks on the Island (by utilising the "temple" as a form of measuring stick) were around 107m x 35.5m. Thus the complex of the baths/palestra were a big deviation to the usual street plan. Uggeri speculates that the stadium/palestra might have been part of the Seleucid Regia (palace). As no excavations took place on the southern side of the exercise field, this remains a possibility meriting further investigation. Bath C is certainly luxurious enough to have been part of a complex for the powers that be.

While the floor plan was clear, it was however stripped down to its foundations by subsequent looters of building material leaving little idea of what its vertical dimensions might have been.

Christine Kondoleon's excellent catalogue for the exhibition Antioch: the Lost Ancient City included several computer-generated reconstructions of these baths produced by the Boston architect and graphic artist, James Stanton-Abbott. This work, and the images, were commissioned by the Worcester Museum of Art to accompany its exhibition than ran in 2000-2001. The major essay on Antioch's baths in the catalogue is by Fikrit Yegul of University of California Santa Barbara.

The first reconstruction below (click to enlarge) reproduces and enlivens the floorplan shown above. None of the other baths found in Antioch had such a strictly symmetrical layout as these baths. This is not to say that there were not other baths in this format. Not enough has been excavated of Bath F to preclude that it did not originally have a very formalised layout. This version also adds some more detailed mosaic features. The hot rooms (caldaria) are to the left in this plan. Notice that the mosaics shown here differ from those in the floor plan. above. This was done by "reusing" images of other Antioch mosaics to give an impression of how the floors really looked rather than just using pure geometrical designs as a filler. 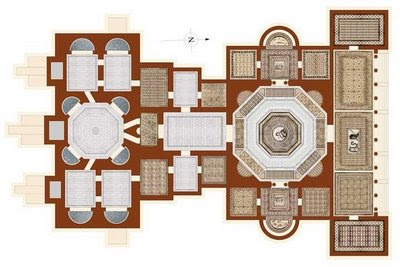 The second image of Bath C from the catalogue is an axonometric view of the bath complex with the wall height projected up to the level of the column capitals. this brings the building alive and gives an idea of how it might have appeared to one of the bath's clientele as they progressed through the rooms. 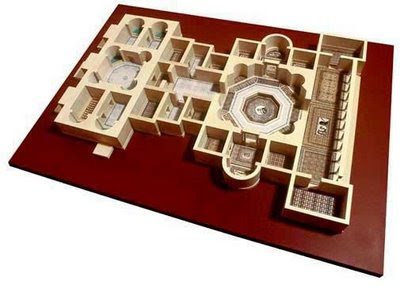 The ruins complex was so scoured of remains by looters that no indication remains of how the roof and ceilings may have appeared (for instance whether there may have been an open space over the octagonal pool in what was probably the frigidarium). The octagonal pool measured 9.5 m x 9.5 m x 1 m . This pool had a significantly larger capacity (c. 70.8 m3) than the pools in the cistern-fed private bathhouses of earlier periods.

Though none are shown in the octagonal room (as no evidence survived to justify them), one might consider some columns may have existed there and presumably both the frigidarium and main caldarium had high rooflines than some of the smaller rooms in the complex. The main baths in Rome, while on a much vaster scale had vaulted and coffered ceilings in these types of rooms.

The other key source on this subject is the report in Volume I of Antioch-on-the-Orontes by Elderkin and Stillwell. This relates the discovery and excavation of the baths. Unfortunately, in my opinion, they did not advance much in putting the baths (or much else they excavated) into an urban context by advancing onto the street in front of the baths and investigating the adjoining buildings. Was the baths structure on one of the four radiating avenues that Libanius speaks of?