Hilton in the Forum of Valens?

Rumours that a "Hilton" was being built on the site of the Forum of Valens have swirled for a couple of years now. The brand name may be wrong but the latest discovery on the site would seems to suggest that we are talking of a site that could very well be the long-lost forum that was redesigned by the Emperor Valens. The area had structures built by the Romans as far back as Julius Caesar, while others such as Tiberius and Commodus has added to the mix.

The article recording the discovery is here:

The site photo in the article shows the massive area uncovered. 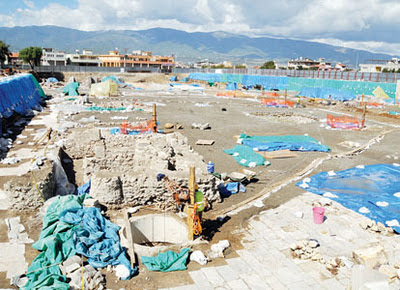 Our thoughts are that 3,000 sq metres of marble paving is not even one of the famed marble streets but quite clearly a very large open space. Morover the 850 sq metre mosaic uncovered is clearly not a domestic structure to have a room of such dimensions and could very well be one of the many basilicas the surrounded the forum, or the Library (the Museion) or some other significant structure.

Here is the google maps view:

This is an enormous shame that this will be buried in a "museum" in the hotel's basement. There should be no building at all in the still lightly covered northern section of the old walled city. While the mayor of Antakya gets all excited about tourists he should maybe look to Ephesus to see what his real potential could be rather than building over the sites. This hotel should go somewhere else.

Not only the Valens forum but most of the buildings and monuments in the ancient "island" area soon will be lost forever. I have sent letters to prominent authorities (i.e, key archaeologist at AIA) to request initiation of a collaboration for the conservation studies, none showed any interest (except for C. Kondoleon)...